Dutch native Marco Teutscher has already proven himself as one to watch on the global pool scene, and now the world-ranked number 61 is playing with a silver fern on his sleeve. 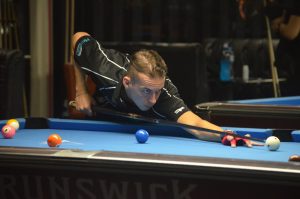 The 27 year-old made a splash at the US Open 9 Ball championships in Las Vegas last month when he defeated tournament favourite, 2018 Mosconi Cup MVP Skyler Woodward, finishing the competition 17th overall out of 256 players.

And while he plays at global tournaments under the flag of the Netherlands, he’s become an adopted son of New Zealand pool since following his Kiwi girlfriend home from overseas in 2015, and now bases himself in Auckland.

Playing out of the New Lynn branch of cue sports club Massé, Teutscher has fast become one to watch in New Zealand cue sports, including taking out the top spot at the national 8 Ball championships held in Pukekohe in May.

In contrast to New Zealand’s tall poppy syndrome default, Teutscher isn’t shy to back himself to win.

“I’ve played for many years and I have a lot of experience; I know I have it in me to beat my opponents,” he says.

First picking up a cue when he was 11, Teutscher became a regular around his local pool clubs in Eindhoven before being noticed and offered professional coaching. At the age of 13 he was playing for the national team, and during the next eight years became a fixture in Dutch competitions before playing in competitions around Europe and later, in the World Pool Association (WPA) 9 Ball Championships.

He’s quick to say that good technique comes down to practice and mental toughness.

“Anyone can play pool, but to play well, 80% of it is mental toughness and confidence – handling yourself under pressure, keeping your cool and using your experience to your advantage,” he says.

“You’re on your own out there and in your own head a lot, and you can’t afford to let your opponent see that you have any doubt going through your mind. Once they do, it’s over.”

Teutscher practices pool for 20-30 hours a week, on top of regular running and meditation to keep his mind clear and “in the right space.”

“I also make sure I eat well, not too much sugar, and get lots of rest.”

On top of his own training and running a family billiards business in Glenfield, Teutscher also coaches some of Massé’s juniors, a team of which is currently representing New Zealand at the  VNEA world pool championships in Las Vegas.

Massé sends around 30 senior and junior players each year to the VNEAs, a competition that brings together more than 4000 players from around the globe to compete. In the past five years Massé players have brought home 11 world titles and achieved several placings.

“It’s great to see clubs like Massé supporting up-and-comers in the game – that’s the way it should be. I wouldn’t be where I am without it,” he says.

Teutscher says while he’ll continue to compete in New Zealand, his eyes are still very much on a world title.

“My ultimate goal is to win a major event like the world championships in the next two years. I know I can do it, it’s just a matter of putting in the time and to keep doing what I’m doing.”

Massé general manager Bernie Endres says having someone of Teutscher’s calibre in the club is motivating for other members.

“We’ve really enjoyed seeing Marco progress even further in his career since coming to New Zealand, and we’re obviously really excited for our junior members to benefit from his expertise and coaching.

“And it goes without saying we’ll be cheering him on to his first world title, which, judging by his most recent performances, won’t be too far away.”