Massé Incorporated are very passionate about cue sports and have taken on a full time, in house cue sports coach to provide free coaching to all our members. Each week Jimmy “The Professor” Henry travels around each of the Clubs to provide quality coaching to members who want to improve their game in any way, tips for tournaments coming up and sometimes just a good chat. Check out some of Jimmy’s greatest achievements:

Jimmy Henry first started playing pool at home and saw his first pool table at age 7. He never had access to a coach so his earlier days were more about hitting the balls around the table, when he was allowed to play, not really knowing what he was doing. When Jimmy hit his teenage years, he started practising a lot more and without access to the internet, being the early 80’s, he was self-taught. He could confidently pot balls but had no idea about cue ball control or the other intricacies that are involved in the sport of Pool. Once he was old enough, Jimmy started to play at the local bars and that’s where is career began. Fast forward a few years and Jimmy Henry has conquered a variety of championships as well as touring overseas for the sport:

These days, Jimmy is a qualified Pool coach who works for Massé Incorporated. Each week he travels around the Massé Clubs and provides free coaching to anyone and everyone who is interested in improving their game. He is committed to making it easier for beginner or novice players to remain in the sport and train teams and individuals to make a big impact. Jimmy prides himself on his core values when it comes to his coaching services, with his main focuses being:

Jimmy Henry has a real passion for passing on all his knowledge and experiences of his favourite game and that is why he is a major asset to the crew at Massé Incorporated. 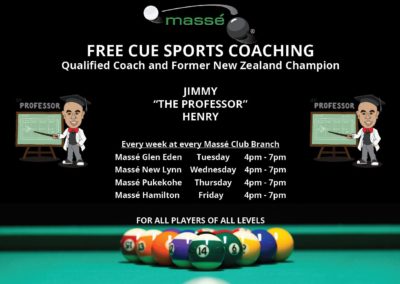 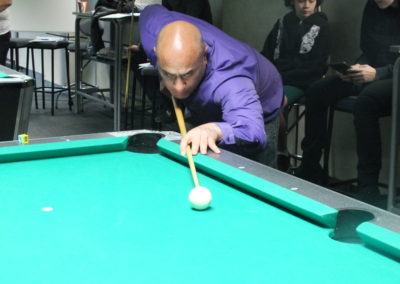