Another great turnout at the Predator 9 Ball Tournament held at Massé Hamilton last weekend. The quality of play was outstanding and the level of play is lifting immensely creating a lot of upsets throughout the day. 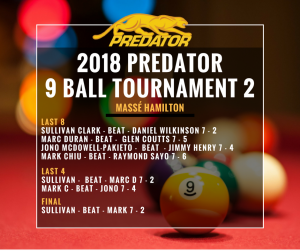 Player of the day was Marc Duran from Massé Hamilton, beating the pre-tournament favourite Glen Coutts. Our tournament number one ranked player Allen Bain, lost to the talented and dangerous player Roldan Largo. Roldan will be representing Massé at the VNEA Championships in Las Vegas later in the year.

Twenty-one-year-old Sullivan Clark surprised everyone when he beat the consistently on form Mark Chiu in a lopsided match 7-2. Watching this game was very exciting. Sullivan showed top skills, taking all of the right shots. He played the right safety game at the right time; his technique was top notch and he had good cue ball control to get around the table. Many would agree that this display was that of a future champion.

With the chance to earn the opportunity to play in an international tournament of your choice anywhere in the world, everyone is now putting in quality practice time. This is lifting the level of play and bringing new players to Massé. For more information check out this link: http://masse.co.nz/play-pool-tournament-choice-anywhere-wo…/